This category organizes all of the articles that have been featured on the Main Page of Weezerpedia as Featured Articles. There are similar pages for Weezerpedia's Featured Songs, Featured Images, and Featured Videos. 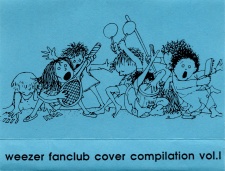 Weezer Fanclub Cover Compilation Vol. 1 is a compilation album featuring covers of Weezer songs by members of the Weezer Fan Club. It was compiled by fan club founders, Mykel and Carli Allan, and released in 1996.

The album's formation began when a request for Weezer covers was placed in the Winter 1996 issue of Weezine, alongside an announcement that a number of fan submissions would be chosen for inclusion on a "Weezer cover compilation tape". Approximately 60–70 submissions were sent into the fan club via cassette, where they were sorted through by Mykel and Carli (publishers of Weezine and heads of the fan club). The sisters selected 18 final tracks and the submitted tapes were mastered onto a DAT by Pat Wilson, after which around 250 copies were produced at a Portland tape duplication service. The compilation was made available for purchase for $5 via mail order in the Summer 1996 issue of Weezine, selling out within 6 months.

A second compilation was planned, and new submissions were requested in the May 1999 issue of Weezine. However, likely as a result of the earlier death of the fan club founders and slow decay of the fan club thereafter, the album would not be finished.

The following 55 pages are in this category, out of 55 total.