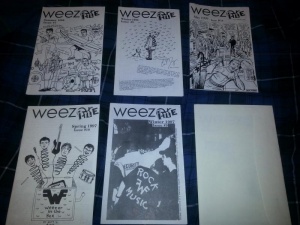 Several issues of the Weezines, including a sealed copy of the Hear You Me issue from after the M&C benefit show pictured bottom right.

Weezine was the official Weezer Fan Club periodical, the title being an amalgam of Weezer and 'zine', the shortened moniker for amateur, photocopied publications.

When the official Weezer Fan Club was started by Mykel and Carli Allan in late 1994, one of the first orders of business was to establish a quarterly zine to serve as the primary source of band news for the dedicated fan. The original Weezine ran for twelve issues before the Allan sisters were tragically killed following a Weezer show in July of 1997. Karl Koch made a valiant effort to keep the fan club going following the tragedy, and managed to publish a few more issues of the zine. Eventually, due to the band's late-90s hiatus, Koch had to let the fan club, and its publication, cease for the time being.

When the Fan Club was reborn in the early naughts following Weezer's return to action, the Weezine was also reborn. It ran for several issues before the new version of the Fan Club folded.

The usual content of a Weezine could include any combination of the following items: