Ozma is a rock band from Pasadena, California. The band, who have cited Weezer as a major influence, have performed in concert and on tour with Weezer on many occasions and members of the two bands have collaborated on numerous occasions.

The band that would later be named Ozma was initially formed in 1995. Dubbed "Paper or Plastic," the lineup consisted of Ryen Slegr (vocals/guitar), Jose Galvez (guitar/vocals), Patrick Edwards (drums), and Matt Herman (vocals/bass).[1] Herman departed from the band shortly after its band's formation, reportedly due to creative differences. Daniel Brummel, who met Galvez through an AOL profile search while looking for a local band to join, was introduced to the other band members by Galvez in September of 1995. The band went through various names during their first year with their new bassist, such as "Sheriff Bob," "Power Cool," and "Cosmic Egg," but in 1996 the band officially changed its name to "Ozma." One of the band members had taken a "Wizard of Oz" book off of Patrick's mother's bookshelf while brainstorming new band names. They proceeded to flip to a random page and put their finger on a word without looking. That word was "Ozma." Later that year, the band was joined on keyboards by Katherine Kieckhefer, who Brummel had met at summer school.

From 1996 to 1997, Ozma recorded demos to a Fostex XR-5 four-track tape recorder and distributed them to friends on cassette under the titles Cuatro and Ocho. In mid 1997, they recorded the First Strike EP, the band's first studio release. In 1998, the song "Iceland" appeared as the first track on the compilation album Hear You Me! A Tribute to Mykel and Carli, which also featured songs by Weezer, That Dog, Supersport 2000, and Kara's Flowers. Ozma attempted to record again that year at Ocean Way Recording Studio with former Weezer guitarist Jason Cropper producing, but the master tape was, allegedly, lost before a mix was delivered.[2] Kieckhefer departed the band later that year, leaving Brummel to fill in on keyboards for the singles "Lorraine" and "Los Angeles", which were produced by Rod Cervera (of the Rentals and Supersport 2000). In late 1998, the band was joined by Star Wick on keyboards, who has remained with the band ever since.

Ozma released the compilation album Songs of Inaudible Trucks and Cars near the very beginning of 1999, featuring demos and live recordings by the band. Initially distributed on homemade CD-Rs, the songs were later re-published on MP3.com in late 1999 (albeit under the title Songs of Audible Trucks and Cars, due to a character limit).

Rock and Roll Part Three and touring with Weezer

On January 1, 2000, Ozma released their first studio album, Rock and Roll Part Three. During these early days, Ozma played numerous venues throughout the state of California, garnering a regional following. In the summer of that year, Jose Galvez delivered a copy of Rock and Roll Part Three to Rivers Cuomo after seeing Weezer perform on the 2000 Vans Warped Tour. The members of Ozma eventually received word from Cuomo's friend Justin Fisher that Cuomo loved their record and was playing it repeatedly and "singing along to every word."[3] Rock and Roll Part Three was later reissued by Kung Fu Records (owned by Joe Escalante of the Vandals) on August 21, 2001. 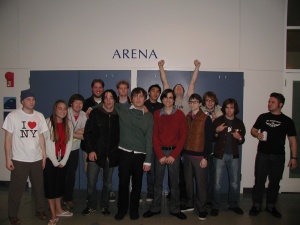 Ozma with Weezer and the Get Up Kids on the Yahoo! Outloud Tour.

Ozma achieved mainstream attention in July of 2000 when Weezer asked the band to open for them for two shows in Sacramento and Los Angeles. Then, in January of 2001, Ozma was invited to open for Weezer on the Yahoo! Outloud Tour. Weezer fans expressed similar enthusiasm for Ozma, as the band received the second-most votes (behind only Kansas City-based band The Get Up Kids) in a Rebel Weezer Alliance poll asking fans who should open for Weezer.[4] [5] [6] [7] In 2002, Weezer invited Ozma to tour with them again on the Hyper Extended Midget Tour, alongside the band Saves the Day.

The Doubble Donkey Disc and Spending Time on the Borderline

On February 21, 2001, during Ozma's first tour opening for Weezer, Ozma self-released their second studio album, The Doubble Donkey Disc. With this album, Ozma incorporated alternative instruments such as the flute and the Russian balalaika. The album is comprised of ten tracks split into two album concepts dubbed Russian Coldfusion and Bootytraps.

As a result of the newfound exposure from performing on bills with Weezer, Ozma signed with Kung Fu Records in early 2001, leading to a main stage appearance on the 2002 Warped Tour. Kung Fu subsequently released remastered and enhanced versions of Rock and Roll Part Three and The Doubble Donkey Disc. On May 6, 2003, Ozma released their third studio album, Spending Time on the Borderline, on Kung Fu Records. This record saw the band move away from the keyboard-driven, so-called "video game" rock of the earlier albums. From 2001—2004, Ozma toured the United States multiple times alongside bands such as Nada Surf, Superdrag, Piebald, The Format, Rilo Kiley, Rooney, Mae, and Straylight Run.

Ozma disbanded on July 23, 2004. In a message posted on the band's official website, Ryen Slegr cited deteriorating relationships between band members which affected the "creative and professional facets of the band to the extent that no one [felt] like continuing…"[8]

On December 3, 2005, the former members of Ozma (sans Patrick Edwards) opened for the Wrens at the Troubadour in West Hollywood under the moniker Irregardless (being unable to use "Ozma" due to booking reasons).[10] The band performed five Ozma album tracks, as well as the Spending Time-era outtake "D Song" (later renamed "Underneath My Tree"). A friend of the band named Gerardo Berdin[11] played drums during the set alongside future Ozma drummer Kenn Shane. This, combined with the news that Brummel had recently moved back to southern California, sparked rumors among the Ozma fan base about a potential reunion. On January 9, 2006, the band announced that they had reunited (sans Patrick Edwards):

WE: Star Wick, Ryen Slegr, Jose Galvez, and Daniel Brummel, do hereby declare our full and true intention to reform, reunite, and otherwise reanimate the rock group OZMA. Manning the drum kit for this incarnation of OZMA will be Kenn Shane, formerly of Addison. After rehearsing and working on new material since September 2005, we will play our first reunited concert on Sunday, March 12th, 2006 at the Knitting Factory in Hollywood, CA. Tickets to this concert will be made available on January 14th, 2006. Announcements regarding future OZMA releases and tours will henceforth be made at our official website OzmaOnline.com.[8]

Throughout July and August of 2006, Ozma opened for the (also newly-reformed) Rentals on the latter's summer tour with Ryen Slegr additionally performing as a member of both Ozma and the Rentals. In September, the band announced that they would be touring the US again in October with the band Hellogoodbye. Later that month, the band uploaded two demos of new songs they had recorded to their Myspace page. The songs, titled "Straight Flush" and "Barriers," were recorded over the summer of 2006.

On February 14, 2007, Ozma announced via their Myspace account that their newest album would be released on May 15 through About a Girl Records. The album, Pasadena, was named after the band's California hometown. On May 11, Ozma made an agreement with Myspace to stream the whole album on their homepage. Pasadena featured guest appearances by Matthew Caws (of Nada Surf), Will Noon (of Straylight Run and Fun), Rachel Haden (of That Dog and the Rentals), Ben Pringle (of the Rentals and Nerf Herder), Eric Summer (of Get Set Go), and Benjamin Chadwick (of New Maximum Donkey). Allmusic referred to Pasadena as "the strongest work of their careers," giving it a 4.5 rating out of 5.[12]

The Crabs and the Weezer Cruise

In 2009, Jose Galvez and Ryen Slegr joined members of the band Teaneck to form a Weezer tribute band dubbed The Crabs.[13] The group played two shows that year: a tribute to Weezer's Green Album and a tribute to Pinkerton. The band also covered the Weezer b-sides "I Do," "Waiting on You," and "I Just Threw Out the Love of My Dreams" (the latter of which featured Star Wick and Daniel Brummel as guests on lead vocals and keyboards, respectively).[14] 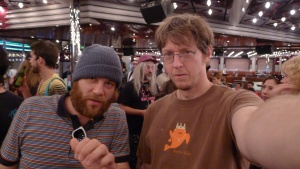 Ryen Slegr with Karl Koch during the Weezer Cruise.

In 2011, Ozma was among several artists invited to perform on the four-day Weezer Cruise from Miami to Cozumel. In preparation for the cruise, Ozma performed with Moses Campbell and Body Parts at the Glasshouse in Pomona, CA on November 26, the first Ozma concert in over three years. The band performed Rock and Roll Part Three in its entirety to celebrate the album's 10-year anniversary. During the encore, members of the Rentals (including Matt Sharp) joined Ozma on stage to play the Rentals songs "Waiting," "Getting By," and "Friends of P."

Boomtown and other projects

In 2013, following the first Weezer cruise and six years after the band's last album, Ozma launched a crowdfunding campaign through the website Pledge Music. The campaign was successful, raising over $20,000, over 150% of the amount requested. As a thank-you to fans who donated, the band also released the Pasadena-era demo "Kid Icarus." On February 11, 2014, the band released their fifth studio album, Boomtown.

Throughout 2013, Daniel Brummel and Ryen Slegr collaborated on several songs with Rivers Cuomo, including what would eventually become the Weezer track "Eulogy for a Rock Band" from the band's 2014 album, Everything Will Be Alright in the End. Brummel performed on drums with Weezer on multiple occasions throughout 2013 and 2014. On the EWBAITE Tour, Brummel contributed additional instrumentation in character as "Joe Laffoley". Also in 2014, Ryen Slegr joined the Rentals as a guitarist and engineer, performing on the album Lost in Alphaville and its subsequent tour.

On December 19 and 20 of 2019, the band played two sold-out shows at the Troubadour celebrating the 20th anniversary of Rock and Roll Part Three. On August 22, 2020, the band re-released their demo album Songs of Inaudible Trucks and Cars through the music platform Bandcamp. On December 11, Rivers Cuomo released the digital demo bundle Weezma: Daniel, Ryen & Rivers on riverscuomo.com, comprised of demos from Cuomo's songwriting sessions with Ryen Slegr and Daniel Brummel from 2013 and 2014. In January of 2021, the band conducted a Zoom interview with fan-submitted questions[15] for the 20th anniversary of The Doubble Donkey Disc. Later in 2021, the band launched an official channel on the video platform Twitch.[16] On July 9, 2021, Ozma released the first of multiple live albums, Ozma - Live Acoustic Set - July 12, 2000 through Bandcamp, nearly 21 years after it was performed. On August 6, Ozma re-released the demo compilations Cuatro and Ocho on Bandcamp as the compilation Cuatro y Ocho.

This list contains all studio collaborators and touring members of Ozma.