OK Human is the fourteenth studio album by Weezer. In contrast to typical Weezer releases, the album features no electric guitar, utilizing exclusively analogue equipment and a 38-piece orchestra.

It was released on January 29, 2021. Physical copies were initially exclusive to the official web store and would see wide release on February 12.

Rivers Cuomo has credited producer Jake Sinclair with planting "the seed of an idea" for OK Human in 2017. "Just you and a piano, and an orchestra, and it's gonna be super-personal, quirky songs that only you could write, not worrying about commercial potential at all,[1] adding that Sinclair suggested he listen to the 1970 album Nilsson Sings Newman by Harry Nilsson. Cuomo had previously covered the Nilsson tune "Without You," originally written by members of the '70s band Badfinger. Cuomo said that he was excited from day one of the creative process for OK Human, and that the songs came quickly thereafter, with the album being "about 90% done" before he was made aware of the forthcoming Hella Mega Tour.

Cuomo first confirmed the album's existence to Zane Lowe in January of 2019. Said Cuomo: "Our next album is not on the grid, we’ve just recorded the basic tracks there’s no click, no grid. We don’t have a real title, but the key word we have to inspire us at the moment is ‘masterpiece’. It’s produced by Jake Sinclair who did the White Album." Cuomo first mentioned the album's working title "OK Human" in an interview with the Los Angeles Times published on February 22, 2019, about a week before the release of The Black Album.[2] Cuomo described the album as "piano-based, very eccentric, with strings already recorded at Abbey Road." Cuomo mentioned that his influences for the album were George Gershwin and Harry Nilsson (specifically, Nilsson Sings Newman). Cuomo also confirmed the existence of another project tentatively titled Van Weezer.

In a July 2019 interview with All Things Loud, Brian Bell described the album as being "about technology and how it’s running our life".[3] Said Bell:

OK Human is unlike anything I’ve ever heard, unlike any other type of music and unlike any Weezer music. In the bass, if you really broke it down to its common denominator, it still goes one, four, five in a major key for the most part. That’s very Weezer, that’s very Sweater Song, but it does it in more sophisticated ways.

In an interview with Spanish magazine Mondo Sonoro, Bell described the basis of the album as "a string section", and that the album would also feature acoustic guitars, a Hammond organ, and would sound very "airy and open".[4] Bell also described the album as one of his favorite albums the band has made thus far. In an August 2019 interview with the Spanish blog Binaural, Bell confirmed that the album's string section was recorded before anything else, and suggested that Crush Management would prefer to release Van Weezer before OK Human.[5]

In 2020, due to the COVID-19 pandemic, the Hella Mega Tour was postponed until 2021. On April 10, 2020, Cuomo stated on the video conferencing platform Zoom that, at the time, the album was 75% complete. He followed this up by stating the album would likely not be released in 2020. On April 16, he explained the premise to a fan as "very much a day in the life of [himself], but from a very private place." On May 14, Cuomo shared a photo via Snapchat of a studio, with visible sheet music titled "Dead Roses". On May 15, Cuomo confirmed in an interview with Mike Jones of the radio station DC101 that the string section was the first to be recorded for the album and that, at the time of the interview, only his piano parts were yet to be completed.

On August 13, Weezer formally announced that Van Weezer was being postponed until May 2021,[6] simultaneously hinting that OK Human would release in the meantime, tweeting "More music coming for you Humans real soon, Ok?" On October 1 through the streaming platform TikTok, Cuomo revealed that the band had a photo shoot earlier that day, later confirming it to be "for the OK Human artwork and the whole album cycle". On November 16, Cuomo confirmed to users of Riverchat that the album was complete, adding that the radio mix for the first single was in the mixing process.

On January 5, Cuomo gave more info on the album to the users of Riverchat[7], describing how the album's instrumentation shifted over time to include a full orchestra (as opposed to only strings, as initially conceived). He also confirmed that the album had more than ten tracks. The same day, Barry Summers of the video production company Fantracks confirmed on Facebook that an upcoming "AR Sci Fi Movie Musical Adventure" based on OK Human would begin casting the following week, providing rough concept art for the video.

On January 12, several members of the Weezer Fan Club reported receiving 3½-inch floppy disks, mailed from a Los Angeles shipping center. The disks were labeled "Masterpiece" with the additional text: "Hi Human, open ReadMe.txt". The disks contained a photo of Rivers Cuomo's face superimposed over that of Bill Gates, as well as ASCII art by Joan G. Stark[10] and a website URL: http://everythingthatfeelssogoodisbadbadbad.com/ The URL led to a Spotify playlist including a track titled "ReadMe.txt" and attributed to "=m=asterpiece" consisting of a female synthesized voice reading a message (likely an allusion to the track "Fitter Happier" from Radiohead's OK Computer):

The first letter of each subsequent track on the playlist spelled out "OKHUMAN". The band's Twitter and Instagram promoted the playlist shortly thereafter with the message "Put a playlist together of all my favorite songs, enjoy!"[11]

On January 18, OK Human was formally announced with a release date of January 29, with the lead single, "All My Favorite Songs" releasing on January 21. The announcement was initially announced through the website www.okhuman.space, which prompted users to solve a series of increasingly complex CAPTCHAs before revealing the album's release date. A brief teaser for "All My Favorite Songs" was released on YouTube January 19. 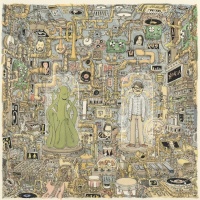 Early version of the cover, as seen on okhuman.space
The cover art for OK Human was illustrated by artist Mattias Adolfsson. Rivers Cuomo confirmed in September of 2020 that he first discovered Adolfsson's work in a comic shop, and subsequently commissioned Adolfsson to illustrate an original piece for the album. The illustration originally featured Cuomo with shorter hair, but was apparently redrawn to reflect his longer hair style as seen in promotional photos for the album cycle. This earlier version was the version initially unveiled on the promotional website okhuman.space.

All songs written and composed by Rivers Cuomo, except where noted.