This category organizes all of the songs that have been featured on the Main Page of Weezerpedia as Featured Songs. There are similar pages for Weezerpedia's Featured Articles, Featured Images, and Featured Videos. 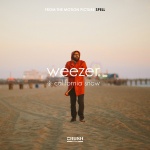 "California Snow" is a song by Weezer. Originally released on September 19, 2018 as a single to accompany the film SPELL. The song appears over the film's credits and in its trailer. The song appeared again in 2019 as the final track of Weezer (The Black Album).

Rivers Cuomo first alluded to the song's existence with a tweet on March 11, 2017, in which he simply stated "California Snow verse was cool". On the 24th of that month he tweeted again: "Got a producer for California Snow". Sometime around September of 2018, a cryptic billboard appeared on Sunset Blvd. in Los Angeles featuring Cuomo as the character Rivers Haskell from what would eventually be revealed to be the film SPELL, which premiered later that month. The billboard (and accompanying fliers) list the character of Haskell as "qualified to prescribe CALIFORNIA SNOW".

The song received a music video in 2019. The song was debuted live (albeit only partially) during the first concert of the Hella Mega Tour on July 24, 2021, with one line of the first verse being changed to "Covid can suck my dick" in response to the COVID-19 pandemic. Cuomo would continue to use this lyric change throughout the tour.

The following 37 pages are in this category, out of 37 total.