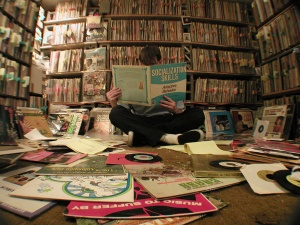 Karlophone is the main music project of Weezer associate and webmaster Karl Koch. Described by Karl as "mixed media collage in the form of mostly instrumental mellow hip-hop," Karlophone combines samples from existing recordings and original music to create songs. Karlophone is also the name under which Koch posts at message boards, such as Albumsix.

Karlophone formed from music and recording experiments started in 1996 by Karl Koch. Originally inspired by a combo of the sample and sound collage work of early 90's hip-hop, the crazy creations of DJ Shadow and his ilk, and particularly by the newfound affordability of samplers and musical gear, an attempt was started to make songs out of a blend of samples and freshly recorded music.

After a few hundred rather repetitive hours of tape was laid down, and a few thousand records were dug into, the first Karlophone album "Press Any Key To Begin" took shape, finally seeing release in fall 2002. "Press" was released to a small but appreciative audience, and gained some positive reviews, notably a nice write up in France's Rock Sound magazine, and an A- review at In Music We Trust, in 2003.

Then Kid Chocolat tackled "Desire" from the "Press..." album, and his remix eventually saw release on vinyl, on the b-side of the 7" single of "Desire".

The "Desire" 7 inch single was released in 2004, and featured the album track 'Desire' on one side, and 2 songs on the B-Side. One was Kid Chocolat's Desire remix (played on the "Soul Strut Radio" Podcast later in 2004), and a new track "If You Listen", which was co-produced by "Franklin Mint" AKA Patrick Wilson, who also played guitars on the track.

The next Karlophone releases were small and obscure. In early 2006, a 30 second long track "How Many Minutes" was submitted and released on YYY Records' "Amazon Grace" compilation, whose purpose was to subvert the Amazon.com 30 second sound sample system by releasing a compilation cd that consisted only of 77 30 second long songs. While the CD is yet to show up on Amazon.com, it was in fact released.

Also in early 2006, the micro-indie label Lap Records of the UK released a compilation called "Beetbox 2: Electric Boogaloo" which was a promo give-away only. This CD included the only CD release of "If You Listen" from the 'Desire' 7".

By Spring 2006, the new Karlophone album was taking shape. The process of refining and remixing proceeded through the summer and into the fall, with recording finally completed by November 2006. The album was called "I Must Find This Karlophone..." and was originally slated for release right after Christmas 2006, but some last minute delays pushed it to early 2007.

The album was released on CD and also on vinyl LP, in a limited edition of 150 copies. Prohibitive production costs prevented it being a 2 LP set, so one song had to be trimmed so the album would fit on one LP.

After the release of "I Must Find This Karlophone...", it was back to the drawing board with the intention of crafting a 3rd album. As of mid 2011, the new material is still under construction.