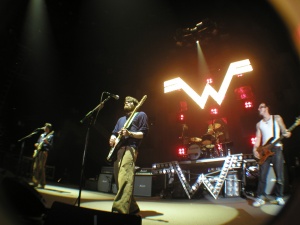 On May 4, 2002 Weezer performed in Ames, IA at the Iowa State Hilton Coliseum on the Dusty West Tour in support of Maladroit. The opening act was AM Radio.


...People from all over the midwest said they were coming into Ames to hit the Dusty West show closest to them, and from what I saw, they werent lying! I heard people say they were from Minnesota, Illinois, and even Indiana, and there was the feverish energy that comes from the confluence of a multi-state weez-hungry mob! This was helped along by an "all GA" show, where people werent restricted to any one area, so the 'mush pit' got particularly mushy. The General Admission status of the show was apparently a first for this arena, so they got paranoid and stepped up the security to a rather extreme degree. Pete Yorn had a prior commitment so he couldnt make this show, so AM Radio stepped up to a longer setlist and rocked it out well. 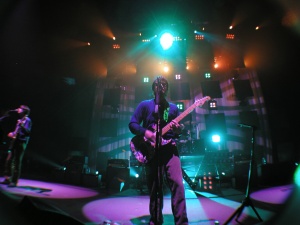 Rivers and Brian in Ames.

...I just got back from my second ever Weezer show tonight, and I must say, Weezer rocked Ames. The show was great and the band did not disappoint a single fan. The sound was as good a live sound as I have ever heard (and I went to Dave Matthews Band three days ago). Bringing out "So Happy Together" was also a great touch as not many were expecting it. The band is on a tour high, and I would love to follow them around to the rest of the tour, but alas, I have finals this week. ---Trevor H

...a quick recap from a big fans point of view: Different setlist was good, no Jonas, but 3 more Pinkerton songs is always good...Dope Nose is a sweet opener, but I'm still used to Surf Wax as the closer. It will take some getting used to...Great show, I'll see you guys in Lincoln ---Andy S

...WOW! Weezer palyed in Ames tonight and did an amazing show! Am Radio did a good job setting us up for the super rock machine that is Weezer but it seems like all there songs sound the same. Pete Yorn as you know did not play this show, so we got right to our weez! First off Weezer razzled us with Dope Nose, i noticed a lot of people knew it and were really pleased with the new work. Most every one sang along to the new stuff and ESPECIALLY to the old. I have never heard a crowed get so into the music, they were really feeling it. I was on the floor and got to the concert 5 hrs early so as to make sure to be in the front, but it turns out all kinds of meat head idiots were in the front. I got pushed and shoved and passed out. Thanks to a couple of kids who drug me out and got me to come to. Also I think there should be a test you have to take to get in to a show cause there were a lot of morons there that didn't know the songs and just came because thats the Trendy thing to do. Like all the meat head a-holes that pushed ther way arround and keep the real fans in the middle where we could actually breathe. But after i got to a comfortable area and even before that show was amazing. I don't think Hilton, Ames, or even Iowa has been rocked like that ever... ---Scott