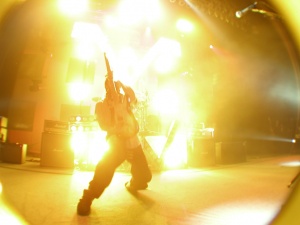 On May 19, 2002 Weezer performed in Fukuoka, Japan at Club Zepp on the Japan World Cup Tour in support of Maladroit. The opening act was AM Radio.


...Today we took a (strangely nearly empty) flight on a 747 from Tokyo to Fukuoka, about 900 miles to the south, and proceeded over to the club after about 1 hour of chill time at the hotel. Todays show was in yet another Zepp club, another small theater/large club style hall. This one was adjacent to a mall that contained a crazy arcade, roving bands of weezer fans, and all sorts of colorful weird things. Fukuoka, or at least this part of Fukuoka, seems very much like a sort of suburban tourist area. From the plane we spotted lots of beaches, and the atmosphere seems geared towards recreation. Of course there are massive areas designed for shopping, which seems to be a basic requirement for any Japanese population center. Another suprise setlist tonight kept people guessing and stoked, with Brian's "Yellow Camaro" making another appearence, and "El Scorcho" doing a fine job as encore. Also, "Space Rock" saw its live debut (I think), and sounded rad to me.

...How do you do. I went to the show of today's Fukuoka. Although the show of weezer is seen 3 times and cooked until now, whenever it may carry out, it is excited in wonderful show. My dream is going for the son who becomes in 1 years-old six months to grow up, and to see weezer show together! I want to also show the son the wonderfulness of weezer early. If it becomes 5 years old, can it go? The small body will be swayed and danced if the song of weezer is still told. Moreover, it is waiting for the show in Fukuoka to pleasure early also for one day. ---Ryou.I

...Today my friend Makiko and I went to Zepp Fukuoka!! I couldn't sleep well yesterday. I got up at 7 and listened to all WEEZER's CDs. Karl, did you wear orange T-shirt today? When I was in front of HMV store, I saw a man and I thought it might be Karl, but I wasn't sure that man was you, so I couldn't call out to you. [...it was me - k.] When the show started and when we saw WEEZER, all the audience shouted for joy , it was so big!! The most impressive thing was that all of us could sing and felt the same mood,music, and feelings. Even new songs of maladroit, we remember the words and sang together. It was so pleasant time! The song "Don't Let go", "Simple Pages" and "No one else", I didn't think that Weezer play that so I was really glad to hear that. I had so great time today and I got to love them more and more!! ---Saori N.

...I came from small south island (in the sun?) named Okinawa.And it was first time for me to go and see WEEZER's show.WEEZER was supposed to come to there 2 years ago (with GREEN DAY and BEN FOLDS FIVE),but it was canceled because of big typhoon!!Oh no! So I decided to go to Fukuoka to KICK OFF. I was waiting and thinking "How can I go to bathroom?"at 9:00 AM. Am I so stupid?Because nobodies line up!! I thought WEEZER's fans who living in Kyusyu are very easy going. But it was not. When the show start,every audience was excited SING SING SING , JUMP JUMP JUMP,PUSH PUSH PUSH!!! Now I 'm sure they might be save them energy(?). Then lot's of people had remembered the new albums lyrics already and they were singing as much as they can with Rivers. not only WEEZER's songs but also AM RADIO's"time after time"( Sorry I forgot the song title,but they were so good!! I am glad to hear that them CD will be released this year.) I couldn't breathe almost 20seconds when they were singing "hush pipe" and "why bother?"but I could enjoy the show!! Backache,necktie and bruises in my body are good memories,too. Thank you for the greatest show!! And see you soon. ---Yosh

A recording of "Polynesia" from this concert appeared on The Lion and the Witch.