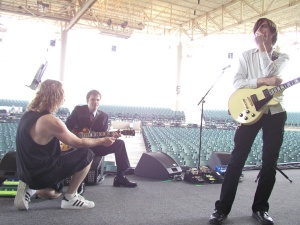 On July 17, 2002 Weezer performed in Indianapolis, IN at the Verizon Ampitheather on the Enlightenment Tour in support of Maladroit. The opening acts on the main stage were Sparta and Dashboard Confessional. Loudermilk, Home Town Hero and AM Radio performed on the side stage.


Finally back in Indianapolis! Well, todays long awaited show was pretty close to standard issue Enlightenment show, (which is a good thing!) No foosball tourney today, but the rock was served up in the requred dosage, and the setlist was choice, including another rare performance of "Across The Sea". The band reported some odd stage acoustics that turned out to be from a vibrating floor section under their monitor rig. All the opening and side stage acts are doing well, laying out solid shows, stoking current fans and winning new ones.

...Just got back from the show at the Verizon Wireless Music Center in Noblesville, and I must say, that show RAWKED!!!! I am a converted Dashboard Confessional fan now, and Sparta put in a great set. But Weezer took me totally by surprise. First off I want to compliment Pat on the use of a china cymbal. Very rock n' roll of him. Sounded great too. Seeing Only In Dreams live has got to be, by far, the greatest thrill I have ever had. The goosebumps, the giddiness, the feeling of your woman in your arms as the boys rock it out. It was a classic rock moment for me. And the drum riser was totally gnarly. Great for the intro into Buddy Holly. Pyro = good clean American fun. And the oodles of Pinkerton songs played was just the icing on the cake. Hearing Getchoo live for the first time in my life was quite an undertaking, as I pretty much lost my voice to this song. Scott is a perfect fit with the band as he seems to mesh well and is quite a stage performer. Good eye in picking this guy up. Hope he can stick with it. All in all this would have to be the best show I have ever seen, and I have seen plenty. I think this even replaces Guns N' Roses back in May of '91 as my top show ever. Great job guys, and I hope to see you guys play again real soon. ---=w= Josh

...figured theres probably a billion fan reports on weezer so I'll tell you about the side stage.
Loudermilk was unbelievable. I'm not kidding. Everyone should go see them. They had a ton of energy and their music was really hardcore and awesome. Afterwards we met the drummer and he gave us sampler CD's. He said 'well, we're technically not allowed to give these out until weezers done, but fuck that.' They were really nice too. Hometown hero was a lot like loudermilk. They rocked just as hard, and the drummer spat a fireball. We left dashboard early for the sake of our soles, and went and got right up next to the stage with Kevin Ridel of AM radio (I think thats his name). That guy is great. He's really nice, and when he was soundchecking we asked him to sing freebird (haha) and he sang a couple lines. Their performance was fun, he was right there with the audience, rubbing everyones head from the stage. He was funny. I liked their song 'I just wanna be loved' (or something along those lines). So anyway in conclusion if you miss out on the sige stage acts youre missing out on a lot ---Patrick O'Connor.