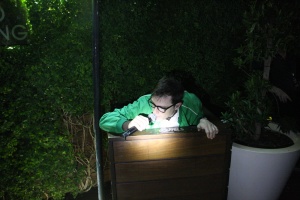 Yesterday, weezer attended the mighty premiere of "Jackass 3-D" at Grauman's Chinese Theater in Hollywood. followed by a raucous afterparty across the street at the poolside lounge of the Roosevelt Hotel. Mucho mas fun was had by all. In attendance were all the Jackass regulars and pretty much anyone who had anything to do with them, a menagerie of famous and infamous types including Spike Jonze, Tony Hawk, Handsome Jack, and Ron Jeremy(!?!).

Weezer was invited not only because of their long standing friendship with Johnny Knoxville (aka P.J. as we knew him back in the day) and Spike, but also because of the collaboration of Jackass and Weezer on "Memories". In the closing credits of the film is a nice sequence showing early footage and pix of the Jackass guys, cut with recent footage of Jackass and Weezer in the recording studio together, doing the gang vocals for the 'Jackass version' of "Memories".

And check out this behind the scenes video from the Weezer+Jackass shoot for "Memories" on Myspace Music!

The Jackass Soundtrack album is available now, and it contains many good songs including the Jackass Version of Memories. Get it here.

...REMINDER TO THOSE VISITING THE NEW WEEZER.COM FOR THE FIRST TIME: You will need to RE-REGISTER on the new site in order to participate (beyond normal browsing). Every registered member can post on the forums, post up their own blogs, post up pictures and videos, get email updates, and more! If you were registered on the old weezer.com, your login info wont work on the new weezer.com - BUT you can recreate your account with the same username/password, and after that it will be the same as ever.