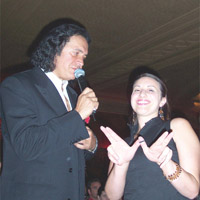 ...UK fans: The MTV2 "Weezer Weekend" is coming up on November 23-24th. They say theyve got "[a] brand new live show, plus loads of other stuff. look out info coming your way soon."

...VH1 update: the "All Access" episode that had some Rivers action was "Most Eligible Bachelors." Rivers was featured in the "Good Guys" category. "...It seems like they did do a bit of research, they knew that he went to Harvard, and they joked about his brother being named Leaves. My one complaint was that they said his favorite sport is foosball, which I would say is a pasttime or hobby. I believe his favorite sport is soccer..." ---Veronica

...press bits:
FHM mag: includes a quiz about drummers in various bands, including Patrick Wilson.
Seventeen [December issue]: odd mention: "If "Island in the Sun" is your favourite song, then 'Clinique Happy' is your perfect winter scent." [...ok...]
Fender.com: in this week's 60-Cycle Hum, a curious bit of proto-weez history has cropped up...

...interesting ebay sighting:
Here's an auction spotted today, for a very cool piece of Weezer history. This guitar was autographed at a Phoenix weezer show back in 1995, not only by all the then-members of weezer, but all of that dog. as well, AND weezer's beloved original fanclub queens, Mykel and Carli! Its definitely authentic [I remember it happening], and very very cool!

...Do you strum a mean cover of a weezer song, or just like such things? See this bboard thread for info on a new fan effort to make a GOOD weezer tribute album. "...because [many] of the songs on the previous tribute albums have [been sub-par] a few boardies and myself have decided we want to make one ourselves, by the fans for the band. we're looking for people to send in songs..." ---Clark

...weez comix: See this site for a cool online comic strip, currently featuring some weez apparel in the mix...

...see this bboard thread for info on a contest that recently got spiced up a bit with the extra prize of a chance for a ticket and aftershow pass to a [yet to be determined] future weezer show in 2003, courtesy yours truly. Good luck!

...weez in the oddest places...
"...Yesterday i was eating at a Local Buffalo Wild Wings in North Tonawanda, New York which is by Buffalo. They have like quizzes on tv that you can do with a electronic keyboard type thing they give you. One of the quizzes was a unscramble the word and they would give you three hints to get it. The Hints were Maladroit, Rock Music, Akward. And it turned out to be Weezer! After they showed the answer they gave a little info on the unscrambled word (Weezer) saying it was one of the best rock albums of the year. Me and like three other people got it right out of the 30 people but still it was awesome." ---Steve W.