...earlier today, waaay over in Jakarta, Indonesia, a very special concert was held. Heres the scoop from Yoga (aka "Weezslave" on the bboards)

"...i just got back from the Indonesian Weezer Tribute Party! the party's official name was "In the Garage Music Party, a Tribute to Weezer". It was held on December 29, starting at noon. 20 auditioned bands, plus several featured bands performed at the Nirvana Cafe & Club, Jakarta. turns out more than 500 people showed up at the club, making it really packed and crowded! the bands who performed ranged from your friendly alternative rock band to those hardcore punks, each
performing their own rendition of Weezer tunes, some were altered to the bands' own interpretation, and some were note-perfect cover of the album versions. i didn't stay until the end of the show so i didn't catch all of the featured bands. anyway it's really great meeting hundreds of Weezer fans here in Jakarta, singing along to the songs, having a great time and, all! --Yoga 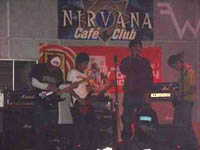 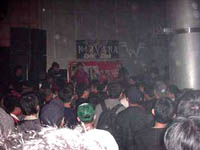 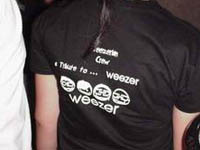 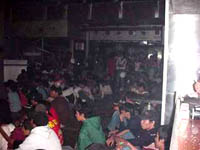 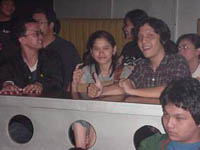 "...the audience head count was somewhere closer to 700. Many of the bands opted for album tracks and b-sides instead of singles, with 'Jamie' and 'Susanne' being two rather popular choices. Generally, the songs played were mostly from The Blue Album and Pinkerton, but there were also a bunch of more recent songs, such as 'Hash Pipe', 'Island In The Sun', 'O Girlfriend', 'Teenage Victory Song', 'Dope Nose', 'Take Control' and 'Burndt Jamb'. No one had the audacity to play any of the scrapped fifth album demos, though...I was so looking forward to someone busting out 'Private Message' or 'Queen Of Earth'...
...The auditioned bands got to play three songs each, most of them playing all-Weezer sets, though quite a few would throw in the odd Radiohead tune or one of their own compositions (usually followed by a collective groan and heckling as soon as a band said they'd be playing one of their own songs). And there were a few bands that seemed to go to the trouble of learning a Weezer song just so they could get a chance strut their (non-Weezer) stuff. Nothing wrong with that, but hey, I thought this was a tribute to Weezer...but anyway, it was good to finally see someone play Weezer songs. Haven't seen anyone do that since Ash played 'Only In Dreams' at their gig...
...Tickets cost just 15,000 rupiahs (just under two bucks). A ticket to a gig by a reasonably big foreign act (like, say, Weezer...hint, hint...) should cost around ten times that amount (the upcoming Suede gig is going for 185,000), but I'm sure many of the people who came the other day would start saving up if they knew Weezer were coming to town." ---Hasief

...check out this bboard thread for a cool new "by fans, for fans" contest...