Please Let That Be You

"Please Let That Be You" is the fifth track from the Rentals' debut album, Return of the Rentals. It is a reworking of "Mrs. Young", a 1993 song written by Matt Sharp.

According to the Weezer Recording History, "Mrs. Young" was written by Matt Sharp in May of 1993, with Rivers Cuomo assisting on "some parts and harmonies". Like the Cuomo song "Jamie", written two months prior, "Mrs. Young" is an ode to Weezer's lawyer at the time, Jamie Young. The two "Jamie" songs were considered, at one point, for an independent single release, but this never materialized.

Another demo was recorded for the group that would eventually be called the Rentals at Poop Alley Studios in the Spring of 1995. The song would be reworked with all new lyrics and a new title, "Please Let That Be You", for the band's debut album Return of the Rentals. This demo, as well as the original 4-track demo, was released in 2001 for the Rentals fan club-exclusive compilation Excellent Stocking Stuffer.

During a Matt Sharp solo show in Fullerton, California in 2004, Sharp publicly reunited with Rivers Cuomo and the two performed four songs together. During the concert, Sharp performed the song "Please Let That Be You" solo before being joined by Cuomo to perform the original "Mrs. Young".

The music video for "Please Let That Be You" features footage of the band on tour during the mid-90s, and was released onto the Rentals official website in 2005. 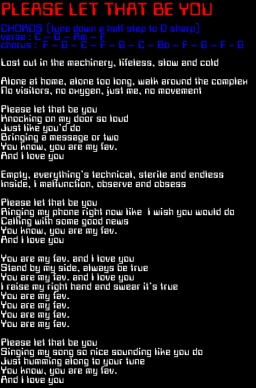 Lost out in the machinery
Lifeless, slow, and cold

Alone at home, alone too long
Walk around the complex
No visitors, no oxygen
Just me, no movement

Please let that be you
Knocking on my door so loud
Just like you do
Bringing a message or two
You know, you are my fave
And I love you

Empty, everything's technical
Sterile and endless
Inside, I malfunction
Observe and obsess

Please let that be you
Ringing my phone right now
Like I wish you would do
Calling with some good news
You know, you are my fave
And I love you

Please let that be you
Singing my song so nice sounding like you do
Just humming along to your tune
You know, you are my fave
And I love you