Posted on Weezer's official Facebook page as part of the "Today in Weezer History" series on November 11, 2013.

Today in Weezer History: 11/10/1996 - Weezer performs in Denver, CO at the Ogden Theatre on the Pinkerton Tour. The morning after "The Good Life" video shoot, the band made haste and flew to Denver to continue the Pinkerton Tour, meeting up with the buses and gear. (The band postponed a show in Salt Lake City to do the video on the 9th). Weezer played The Ogden Theater multiple times over the years, starting in 1994 opening for Live (the all acoustic "no Rivers because he is terribly ill" set), then fully electric in 1995, 1996, 1997, and 2000. 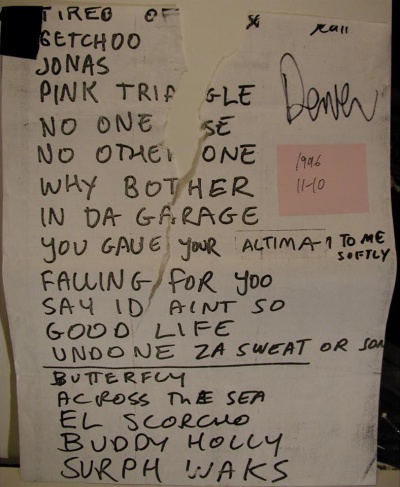