Posted on Weezer's official Facebook page as part of the "Today in Weezer History" series on November 19, 2013.

Today in Weezer History: 11/19/1996 - Weezer plays Saint Andrew's Hall in Detroit on the Pinkerton Tour with Placebo opening. Pictured is the setlist as well as some artifacts from the show that a now unknown fan had from meeting the band that night, including a flyer ad for the show from Saint Andrew's, a signed setlist, and the backstage pass worn to get access to the band. Shows at the (at the time) dangerously located Saint Andrew's Hall were legendary for their chaos, and the (at the time) very small and very old poorly wired stage made for plenty of logistical and technical challenges (perhaps that has been remedied in the ensuing years). No one disputes how intense the Weezer shows that happened there were. In the basement of Saint Andrew's is another club, the futuristic DJ land The Shelter. Usually when Weezer played Saint Andrew's they set up the dressing room in the basement level, as The Shelter wasn't open until late. At the time, Brian has asked for some wheat grass juice on the rider. Someone misinterpreted that and there was a 1' square patch of live wheat grass sitting amongst the chips and salsa etc. Before we left for the night, said patch of grass was secured in a huge antique steel vault we found down there, forever more. 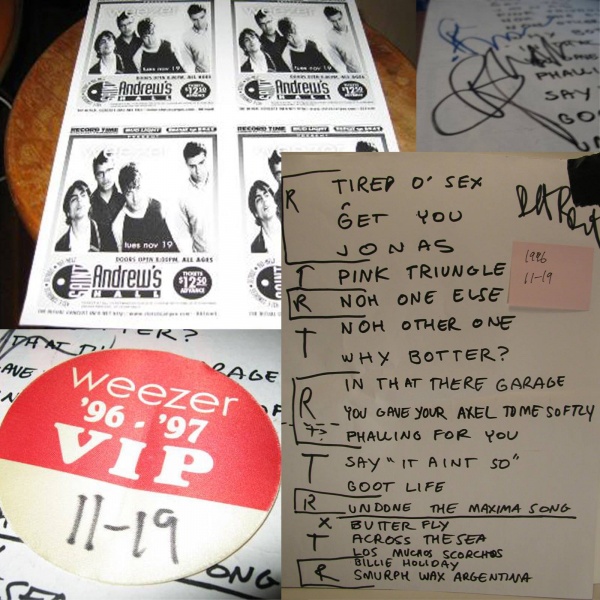