Posted on Weezer's official Facebook page as part of the "Today in Weezer History" series on November 20, 1996.

Today in Weezer History: 11/20/1996 - Weezer plays The Odeon in Cleveland OH on the Pinkerton Tour with Placebo opening. Normally we try not to to do two history posts in a row from the same year, but today is an exception, thanks to OG fan William Graessle who provided today's images. This show was his first Weezer show and the image shows his ticket as well as a photo from the Cleveland Free Times/Scene magazine review (photo credit: Steven Batten). Today's setlist was the same as yesterday's in Detroit (posted yesterday on our FB/IG), and William asks if there was anything unusual about today's show. Nothing besides what he already knew from the review, which is how some fan tossed up a rainbow colored clown afro wig onstage during Placebo's set. The crowd was not too welcoming to Placebo unfortunately, and they shouted "wig!" trying to get Brian Molko to wear it. He didn't give them the satisfaction, but Rivers certainly did, donning it for a while during the Weezer set. Backstage, Rivers and Brian M. were becoming buddies, perhaps sensing a kindred spirit in each other, and were often seen hanging out on this tour. 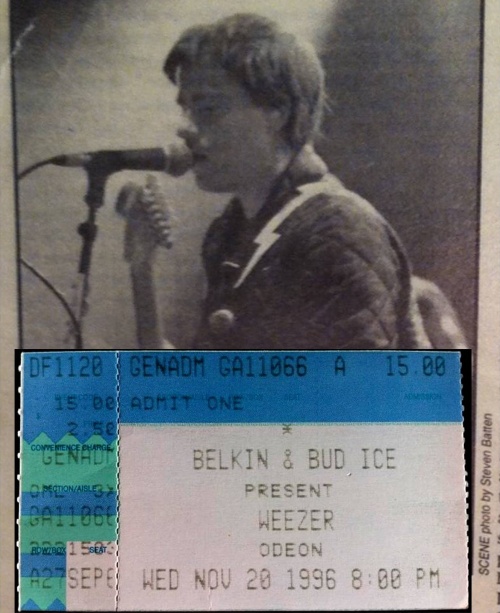