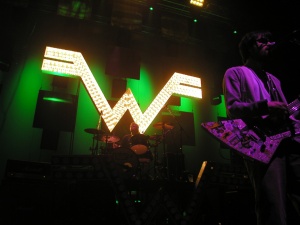 On May 26, 2002 Weezer performed in Tokyo, Japan at Club Zepp on the Japan World Cup Tour in support of Maladroit. The opening act was AM Radio.


...back in the Tokyo groove! We took the shin-kansen (bullet train) back up to Tokyo, got settled, ate a Subway sandwich, and jumped in the vans to the Zepp. Back again. During soundcheck, photographers from 2 different Japanese guitar player magazines took photos of the gear for upcoming features on weezer. (One was "Young Guitar", i forget the other one). Wow, this was the most squashy, sweaty, jumpy, and crazy show in Japan yet! Tonight the Pinkerton track "Falling For You" got its first performance since 1997.

...Today's show was absolutely great, but I felt weird a little bit at the beginning. After the wonderful performance of AM Radio, it took the guys a long time to begin the show, so that we all couldn't wait patiently, and I even thought the guys didn't feel like shooting the show today. However, it turn out that I just didn't have to worry about anything since it looked like the guys were really feeling it and having more fun than last time in Tokyo. Even though I had a feeling that today's set list wasn't as good as last time, I like this show better than last time for some reason. I think it is because the guys interacted with the Japanese audience more such as Pat was throwing many things in the crowd, and Scott was talking to fans at the front while he was playing. Also, Rivers was in a better mood, so that he kept talking in the whole show and showed us off his improved Japanese! It is amazing but his Japanese is getting much better in 7 days. So, these great interactions definitely helped us to enjoy the show more. I expected them to play my favorite song "Across the Sea", which I was so jealous to hear that they played it in Osaka for the first time since 1997; however, it just didn't happen this time unfortunately. It was a bad luck, but I still have one more show to go tomorrow at Nihon Budokan, so hopefully I can see them playing my favorite song then! The show at Nihon Budokan is going to be very different from others since that is the last show for the Japan World Cup Tour and the size and capacity of Nihon Budokan is way bigger than other clubs. Now I just can't wait for tomorrow, and I hope I am going to have the best time ever then! ---Yoshiko #2

...Whether it is good or bad, one thing is for sure. That show was too exciting for me! I was on the 4th or 5th line from the stage and I could see Rivers very close! But aroud me, everyone looks like teenager and I think they are! I tried, but I couldn't sing along or even breath with excited kids jumping, pushing around. In the end, I had to escape in the middle of the song since I was wet to the skin from sweat of mine and people and thirty like crazy (missing my bottle of green tea terribly). I realize I have to give the front space for younger kids...Anyway, I love the atmosphere of the show, singing along Rivers especially. And when I was outside of the room, I could talk to Jason from am Radio. He was VERY nice and as I said to him, I orderd their cd thru the internet. Weezer, thank you for the crazy (kind of sad, realising my age) night and introducing am Radio! ---Midori (8-year long fan of Rivers)

...The show at the Zepp Tokyo was a little slow to get started, but once it was on, it rocked out. When I arrived, I was suprised to see that no one was really rockin' out to AM Radio, despite the fact that their set was tight - probably due to the fact that no one wanted to bump anyone else (Japan is an extremely polite society). But once Weezer took the stage, the crowd forgot themselves and rocked with the music. The fans around me were singing along, and even though some of their lyrics were wrong, it was understood that everyone was just there to hear Weezer do what they do best. Overall - nice venue, great fans, wicked show. ---Kristie

A recording of "Falling for You" from this concert appeared on The Lion and the Witch.