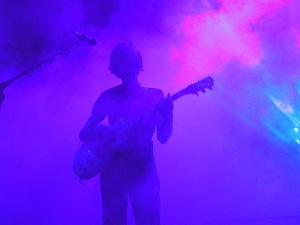 Brian Bell performing in Toronto.
On July 14, 2002 Weezer performed on Toronto, ON, Canada at the Molson Amphitheater on the Enlightenment Tour in support of Maladroit. The opening acts on the main stage were The Weekend and Dashboard Confessional. Loudermilk, Home Town Hero and AM Radio performed on the side stage.


Toronto, the site of so many cold shows in the past, cane through with a perfect summer evening this time, and The Molson, already a nice place to go see a show, was used to its fullest advantage by 10,000+ peeps. This ampitheater is kinda cool in that they keep a front section of the floor open as a "GA" area, while all the surrounding seats are situated for maximun good views of the stage. Thumbs up.
Sparta couldnt make this show, so Toronto locals The Weekend filled in with style. Nothing wrong with the girls taking it to the stage! Their photo will be added to todays pictures soon. Meanwhile, after Dashboard finished their set, they raced over to the second stage to join AM Radio onstage for the end of their set! The small Second Stage was nearly overflowing with rock personnel.
Another satisfying set from the weez tonight, though Pat later reported feeling a bit ill, after perhaps having too much fun on the day off yesterday! But that didnt stop the rock. 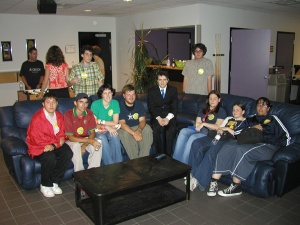 ..Holy Cripes! That was an amazing show. The outdoor theatre was totally blown away by weezers awesome power. The pyro is amazing and the whole random setlist compilation system (rolling of the dies) is producing some amazing setlists. Across the Sea was amazing as was every song on the setlist. Props to Rivers and Scott for the nicely coordinated distortion madness at the end too. I hope you guys seriously consider coming back to Toronto cuz you own this joint. ---WeezerCA

...Hey Karl, how's it going? I just got back from the Weezer show in Toronto and it was amazing!! They kicked ass!! They music and stage show pyro were awesome. I still have a stiffy!! I was glad to see a new mix of songs that were different from their last tour. I love the Pinkerton album, so I was glad to hear El Scorcho and the Good Life. They both sounded great. Tired Of Sex was amazing as usual as that song kicks serious a$$. Only In Dreams was also breathtaking as the drum set rose and gave way to the flying Weezer symbol. The pyro that followed was awesome. Another great show guys and I can't wait to see you again. Keep up the good work Karl. This is the best fan site on the net! ---Paul Anacleto

...Was everyone feeling O.K. at the Toronto show? I saw Weezer for the first time in Hamilton a while back, and the show had an incredible energy. Tonight's show was incredibly mellow (??!!) and a few fan favourites were left out, leaving more than a few of us in a crowd a little (myself, a LOT) disappointed. Looking at reviews from other shows, I see that Buddy Holly, Why Bother and others were played at those shows (although songs from tonight were left out on other nights). I know set lists change from night to night, but it's a real shame - the Hamilton show had everything. I know Weezer concerts tend to be short, but...............!!!!!! The crowd was stunned when the house lights came up. Too bad - the band put on a great show, but left a lot of us feeling a bit cheated tonight. ---amy H.