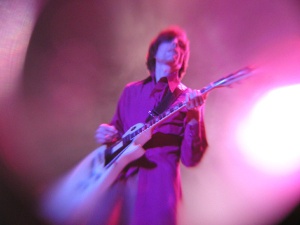 On July 9, 2002 Weezer performed in St. Paul, MN at the Xcel Energy Center on the Enlightenment Tour in support of Maladroit. The opening acts on the main stage were Sparta and Dashboard Confessional. Loudermilk, Home Town Hero and AM Radio performed on the side stage located at 7th Street Entry in Minneapolis.

...Now this show was SOLID! What a rock attack setlist it was, and what a supremely fired up crowd filled the Xcel Energy Center! I sure hope that this trend continues, because this was just an epic show. This show also marked the first USA performance of "Butterfly" since 1997, and also its first ever "electric" USA performance. The show closed with a thunderous "Take Control", which really seemed to fire up the whole place (er, literally...). The fans reactions after the show were testimony, as once again tonight, I got several comments from people who have seen numerous weez shows that tonight's was, to them, "the best ever" or, "one of the best". Nice. 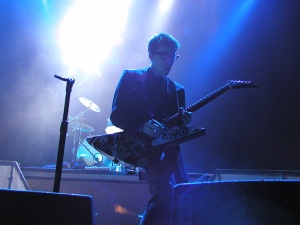 ...It was AMAZING!!! The new Stage setup is incredible! The pyro is ingenious and Atom's between the Act's show was rad as well. Dashboard Played a great show! But when weezer came out and played Good life, I thought I was going to pee myself! And then Holiday, and Tired Of Sex. The intro song is awesome as well , I love the way Scott Rocked out on it! They played many songs I didnt expect to hear, like many Pinkerton songs! And they ended the first set with an electric version of Butterfly! It was insane! My mom started crying because thats the song I played for her when she was sick, or when shes feeling down. Plus she thinks Rivers is hot now (Oh god)!-Andy, Orono, MN

...i just got back from the show and i have to say it was the most intense experience i have had in a while. holy crap. sparta rocked the party that rocked the body and dashboard confessional did a great job getting me ready for the oncoming attack of rock. weezer was absolutely amazing and i was glad to see everyone at the X singing along and having a good time. "The Good Life," "Hash Pipe," "Say It Ain't So," and "Take Control" were my favorites of the night. this was the best concert i have ever been to and i was proud to flash the =w= with so many fans. ---robby

...Holy Pinkerton, Batman. The dice rolled right for all the pinkerton fans tonight as the majority of the set was from it. I think 6 or 7 songs total came from pinkerton. From my point of view the set was awesome, but I would have loved to hear Hey Domingo or any other new song for that matter. Also, I would like to note that the pyro was awesome, make sure to bring it back on the next go around. All the guys looked like they were having fun tonight, with the usual water bottle cap fight between Pat and Scott. Thanks for putting on such a great show, come within driving distance of Minnesota and I'll be there. Peace and Rock On!!! ---Kyle Vierkant, Bloomington, MN