UPDATE: 3:13PMest -- something new for you from weezer! see =rwa= news for the lowdown (link above to the right).
"At Village Karaoke on 3rd Ave and 6th St in NYC you can belt out a rendition
of "Hash Pipe" from the Current Hits section of the song books. Though some
of the die-hard weezer fans in my karaoke group found some of the lyrics
to be debatable." --Sarah Feuquay 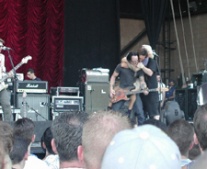 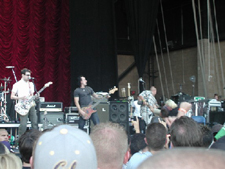 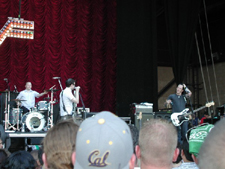 Scott gets attacked, shrugs it off, notices his glasses are missing...pictures courtesy Jamie Walker

...and heres the true setlist to the Inland Invasion show:


and heres an "on stage report" from a fan:

"Just want to let you know that I was at the Inland Invasion show and
throught some expert infiltration and tons of luck, I managed to get
onstage while Weezer preformed their set.
I was right by the guy who jumped on Scott during the middle of Hash
Pipe. Me and some people (I was by myself and didnt know them)let him
jump over the railing cause we thought he had to fix something
electrical or with sound, turns out he just jumped on Scott. The guy in
front of me helped get the wacko off and the crowd burst with cheers
when they knocked him down and drug him out.
Yes Pat shaved his head. He was looking good with his hair, but
either way he's still punk rock. Unfortunately no one on stage was
singing, but I represented. I sung my heart out, except for the brand
new songs. I met the tour manager when he went to check in their room
at my hotel (room 909 but they ended up not staying in it). Then he saw
me on stage and we both had nothing but smiles on. He said he wasnt sure
if Mikey was going to be on tour yet and he had no other details, other
than the band had just been rehearsing the last few days.
The highlight for me (other than "Say It Aint So") was watching the
people in the pit, moshing to "Buddy Holly".
The only hard part was getting used to Scott cause he looked like
he should've been in Smashing Pumpkins or Hole rather than Weezer.
Lastly, after their set the guys just left and didnt stick around,
although Rivers was rumored to be chillin on the grass backstage by
himself. I didnt see but that was the word. Have a good one, I hope this
gave you some insight. Peace" ---Carlos

...the "Island" CD single isn't due out in UK/Europe till October, but the songs to appear as b-sides are known: "O Lisa", the fast tempo track that some heard as an unauthorized mp3 bootleg back in May, "Always", a stringed ballad that is unreleased to date, and "My Best Freinds Are Gone", another previously unheard track. It may be that not all 3 will appear on all versions of the single, much the way the "Hash Pipe" b-sides were scattered about on different versions...