...Spike Jonze's new "Island" video got a "wanna be" (?...wanna be what?) debut on That Carson Guy's Mtv show. Apparently the video was already edited, immediately approved by the guys, and sent off to Mtv. Well, maybe they'll start playing it. The interesting thing is that the other (original) Island video was just recently debuted in Canada and the UK, so it will be interesting to see what happens...meanwhile I'm almost done assembling a new video clip for you, from footage I shot during the new "Island" video shoot. It'll be up very soon.

...for those wondering, Atom is indeed back as Pat's drum tech, (and drumming in Pat's Special Goodness). He did indeed take off for a while, pulling some drum duties in some other bands such as Alkaline Trio, which caused him to miss the Europe Tour back in June and July.

...and for those wondering even more "Sheeny the Organizer" is my name for weezer staff member Sheeny Bang, who is a nice person who joined us at the start of the June Europe tour as Rivers's assistant for his business and managerial duties, and stayed on after that. She's sending pictures and updates to me till I rejoin the band late next week. Speaking of which...

"The start time of two o'clock was met today so that was a huge improvement on yesterday. The guys settled in quickly and began on the next set of new songs. It still amazes me how many new songs there are and these ones being demo-ed were chosen from an even bigger batch. It's insane!

Anyway, there's been lots of laughing and joking between takes with Scott adding-- along with his bass playing-- his endless stream of humorous quips and phrases. He's got a very low resonant voice and great phrases for things that usually would be mundane but are side splittingly funny with his deadpan voice. Everybody is excited about the new songs and spirits seem very high, all in all it's a great highly enjoyable time. Here is a list of the songs they finished today:

So that's 9 more to add to the 6 from yesterday. Can't wait for what tomorrow will have in store!" 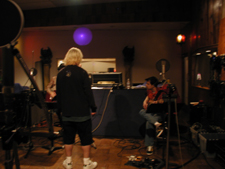 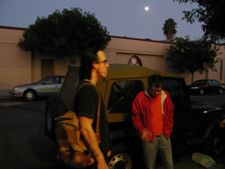 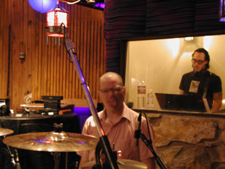 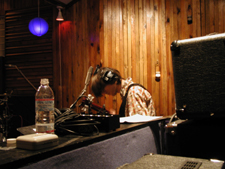