...Canadian fans (and those elsewhere with satellite cable): Tune into MuchMusic on June 24, 4:30 PM EST. Weezer will be featured on the "Spotlight" show, meaning a full half hour of weezer videos and the like!

6/20: The US Men’s Soccer Team left the World Cup Tournament early Thursday morning in a fight to the very end against the stubborn German team! It was pretty crushing to see Team USA go down when they’ve come so far and played so damn well, but it was a very exciting game, and both teams put up a great fight. Rivers went down to the Staples Center to watch the game with a bunch of other eager fans, and everyone was on the edge of their seats right up until the whistle blew. At one point, everyone thought the US had scored a goal when the ball almost bounced into the goal but was deflected by the hand of a German player. The US team could never quite get past that frisky German goalie--who’s only given up one goal during the entire tournament--and in the end the US was beat out of the World Cup by one goal. We’re still extremely proud of our team for a tremendous effort and a phenomenal display of their considerable skills and talent and look forward to watching them WIN a lot more games in the future!

also, a fan writes "...Weezer has a Senegalese football player fan. This would be the Papa Bouba Diop from Senegal, who has [the Blue album]. So, now we know who to cheer for!..."

Note that the "Access Hollywood" show is slated to show some behind the scenes footage from the video shoot, any day now. Sorry we dont know the exact date, but it is coming up. 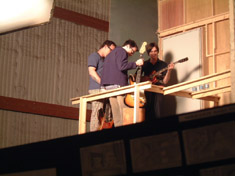 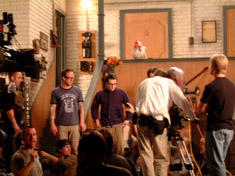 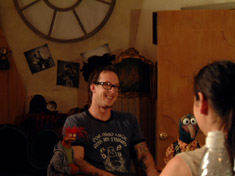 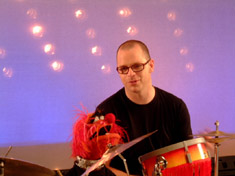 No recording today but Rivers and Pat popped into the studio briefly to check out the scene and hear some edits. It was an easy day so Rivers went to a rehearsal that am Radio were having nearby to hear some new songs they had on the boil. They are getting ready for the upcoming Enlightenment tour as well and are eager to get some new songs in their repertoire. So much productivity going on all around it’s insane!! 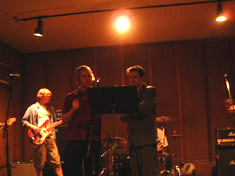 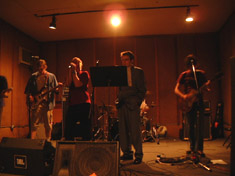 ...Rivers checking in on am Radio...pix and details courtesy SB...

Today was the real start date to this new recording session as most of yesterday was spent getting sounds and setting things up. All four of the guys met up in the afternoon and there was an extra musician to boot. A keyboard player named Shmedly joined them for their session today as they worked on two new songs: "Hey Domingo" and "Running Man". Brian took on the induction role as he asked Shmedly "Do you know how to play 'Rock the Casbah?'" Unfortunately he didn’t, but he was confident he could learn it which seemed to satisfy Brian. All in all, the session went pretty smoothly, interspersed with some strangely ruled basketball games and smoke breaks.