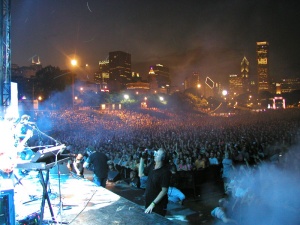 On July 23, 2005 Weezer performed in Chicago, IL at the Lollapalooza Festival held in Grand Park on their tour in support of Make Believe. Weezer were headlining the West Main Stage on the first night.

After a few rough years, this year marks the return of the Lollapalooza Festival, this time not as a travelling roadshow but a stationary 2 day event. As there are already some big events out west every year, Perry Farrell and Co. wisely chose the Midwest to set up shop, namely in Chicago's beautiful downtown Grant Park. When you consider the complexity and logistics of a show like this and all that could possibly go wrong, it was refreshing to find that nearly everything went right.

The midwest was in the midst of a crushing heatwave when Lolla hit town, but today things started to shift, with overcast skies threatening rain, and hopefully some sort of releif from the rediculous temps. At one point in th afternoon the rain came down in huge drops that evaporated almost as soon as they hit the scorched earth, but this cleared up and by evening the sun was setting in full view.

As for the music, when we got there Dashboard Confessional was playing, reminding us of our shared bill with Chris C. and co. on the '02 Enlightenment Tour. We also witnessesd the power and fury of Billy Idol, in top form! Soon, Primus hit the stage in full-on reunited original member mode, with Les Claypool leading them thru all the old classics of demented fretboard prodigousness. Then the legendery Pixies took the East main stage, while the weezer crew got the West main stage ready for the nights closing set. it was such a pleasure to take in the Pixies killer set while waiting for weezer's turn in the spotlight.

Perry Farrell took the West stage near the end of the Pixies set over on the East Stage to introduce an somewhat unexpected bit of entertainment, a 'tribute to Chicago', featuring a trio of scantily clad dancer girls doing their thing to (I think?) one of the songs from the musical 'Chicago'. Combined with the Pixies doing their encore "Where is My Mind" in the background, it was a very... interesting sight. Then Perry was back on stage, to introduce weezer, and he did so very warmly, talking about weezer's "beautiful songwriting" and saying they were "cool like James Bond"!

Weezer played like there was no tomorrow, which in terms of this leg of the tour, there wasn't! The scene was as epic as could be, with 25,000 people rocking out in the audience and the amazing Chicago skyline lit up behind them all. There was copious amounts of awesome rock moments all throughout the set, including a never before seen instance of Rivers sitting on the front edge of the stage during the instrumental 'Death And Destruction", and a very very rare instance of Scott tossing one of his prized basses to the sky, letting the rock gods do with it as they will as it plummetted back to earth with a huge bang! (with only minor damage as it turned out) Its hard to describe the majesty of this show, which was a fitting and triumphant end to the July tour. But Jordan Schur, head of Geffen Records was there, rocking out on the side of the stage, and he may have summed it up best: "That was the greatest weezer show I've ever seen. This is such a great band. Rivers' connection to the audience is real and tribal now. The whole experience is exponentially more satisfying than ever before."

What an awesome show tonight! Weezer definatley stole the show. Opening with Say it aint so was a great way to start the set. I saw =w= right before Make Believe came out at their last chicago appearance and they were even better this time. I loved Rivers' dialogue with the crowd between songs, particularly what he said before playing El Scorcho (which was itself a treat to hear). I really like that Brian and Scott are taking over more of the vocals and I was happy to hear some maladroit songs--there were none in the set list last time. It was funny when Rivers got the set list mixxxed up and had to be corrected. Scott has this really cool move he does where looks like he's going to limbo. I enjoyed that. Pat's drumming was very solid throughout the night as well. It seemed like there was a loop going during El Scorcho cause at during the breakdown he stopped and there was something else there. [editor's note: no loop, not sure what Al heard] Scott threw his bass down hard at the end. He's the man. Thanks for a great night! ---Al in Chicago

After many many hours, weeks, months, and even YEARS of waiting I finally got to see Weezer for the first time tonight and I am left speechless. My friend and I travelled to Chicago from the city of Wollongong [Australia] which is about an hour's drive from Sydney just to see Weezer. Weezer hadn't visited our shores since '96 and I was under 18 then so it was impossible for me to see them! But after tonight I can finally say that I can, and what was presented was the greatest rock show I have ever bore witness to. It was the perfect setlist, weather, audience and Rivers seemed in full swing and very positive to be where he was. It was fantatic to hear Brian and Scott sing, and the audience participation in songs like El Scorcho and and Perfect Situation were priceless. The band sounded 100 times better than than they do on record, which is saying something as they are perfect on record! Thank you Scott, Brian, Patrick and Rivers for what was surely one of the highlights of my life. ---Angus T., Australia.