...Summer EP update: The upcoming summer EP release from weezer is entitled "The Lion and The Witch" and is scheduled to be released soon. An exact date will be announced when we have it. While originally it was announced that the EP would contain 8 tracks, it has been changed to 6. More details:

A couple of months ago, Geffen came to the band asking for an ep to be released in limited quantity and only available in independent retail stores. The ep is in reaction to the label doing eps with other artists that are only available at say Best Buy or Kmart, WalMart etc.. CIMS and Music Monitor, two groups of unified independent retailers, approached Geffen asking to have the same treatment except, instead of having Sheryl Crow or U2, they asked for WEEZER. Weezer, being Weezer, decided that instead of just throwing out previously released b-sides or album tracks, they would create something new. At the last minute they recorded the latest Japanese tour for the purpose of using the live tracks for what is now known as The Lion And The Witch. In addition, the new version of Keep Fishin’ was recorded at the end of the tour, so that was also a logical choice for the ep.

While the live shows were being compiled, Francesca Restrepo (Weezer’s art director), was putting together the artwork for The Lion and The Witch. She commissioned an illustrator and planned a special package (as opposed to the traditional jewel box). Geffen came back to the band and said the package was too expensive and the number of songs on the ep needed to be reduced from eight songs to six as to not upset the other retailers who wouldn’t be getting the ep. The band did not want to back down on the issue of the artwork but understood the impact of having more than six songs. After further discussions with the label, the label agreed to the roll with the planned special packaging but only if the band agreed to reduce the number of songs. In reality though, the number of songs will be seven. The song which was temporarily known as “Polynesia” will still be on the ep but will not be listed as a separate song. Unfortunately, one finger has been cut off to save the arm. The Lion and the Witch will be available at independent retailers soon in a limited pressing of 25,000, in a US pressing only.

...Dave Letterman show update: New York City area fans interested in trying to get into the Dave Letterman Show on Thursday, July 25th to see weezer perform will need to know that on Thursdays, the show tapes twice, the 4:30 taping for Thursday night, the later taping for Friday. Weezer will be performing at the 4:30 PM taping, NOT the later one, and their performance will air later that same night (the 25th).

Mtv will be showing the Keep Fishin' Making The Video (already being shown on Mtv2) on July 27 at 11:30 PM. [EST, i think]. Meanwhile the live whiskey concert has been shown several times now on Mtv2, and is due for another airing tomorrow, July 20th at 12:30 am [again, EST i believe].

Keep Fishin' continues to gather steam at radio around the USA. Several reports have come in: 107.7 the end Seattle (hit number 1 on people's choice countdown on 7/16, ahead of RHCP and Eminem!- also they edited a special version with audio from the video tacked on to the ending)...Long Island's WLIR 92.7 (added)...104.9 san francisco/san jose CA (playing the track along with "lots of other weezer songs")

...Random thing #1:
A video clip has surfaced showing the winning performance of "Hash Pipe" at last years air guitar championships. The song is edited strangely, but this is worth watching for the humor. (warning: unknown server capacity) air guitar video. 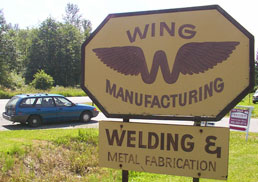 ...spotted just outside of Sedro Woolley, WA., by Spangler and the Weaz...

The revent waves of demos released on the audio-video page has inspired some strong debates and ideas as to which ones are worthy of pursuit and what needs to change. Of course its difficult to get a consensus amongst all the fans, and thats what the message boards are for. Anyway, some interesting comments and developments have come along:

(If you have comments: as always, all song/album comments are best posted on the message board, where band members are most likely to see them.)