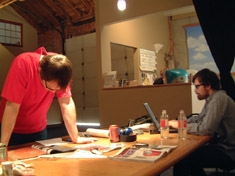 ...from last Saturday, a break in the action during the Spin photo shoot...

...More Maladroit than one could shake a stick at.

photograph video! Okay, it looks like I got some bogus info before, as several folks have written in explaining in detail that they did indeed see the "real" Photograph video being shown in such stores as Champs. We have no idea how those chains got a hold of it, but thats very cool!

karl witnesses the random action: I went to Home Depot today and the second I walked in the huge doors, 'Photograph' started playing on the stores P.A. (the song after that was "back to life" by soul II soul, then "dont speak" by no doubt). Many fans have written in having heard both 'Island' and 'Photograph' (not to mention other weez tracks) in all kinds of different stores, from Ralphs supermarkets to The Gap. I conclude that many weez tracks have gotten into several different cable radio rotations, and as of today I know the feeling of the random weez action!