"...When I heard the title to weezer's new album, it reminded me of traumatizing childhood experiences at an Episcopalian preschool. The teachers made us play the maladroit game after cleanup time. We had to hold hands and dance in a circle and if we knocked down a toy, we had to go to the middle of the circle and everyone would dance around us screaming "maladroit maladroit you are the maladroit", until somebody else knocked down a toy. This was to teach us the value of cleaning up but I think it was just so the teachers could laugh..." --catch

...The first day back in the studio (Wednesday 4/3) was pretty mellow. Chad and the techs (welcome back to Bobby the Guitar Schneck) spent the good part of the day getting drum sounds and other technical stuff, and the guys started to come in around 5. The vibe was cheerful and mellow. And Rod Cervera is back on the scene as an extra set of ears again. The actual recording didnt last too long that day, possibly due to some lingering jet-lag. They worked on "Private Message" and another new song that they didn’t get very far on. 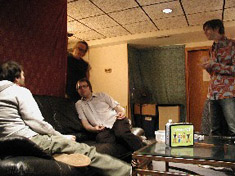 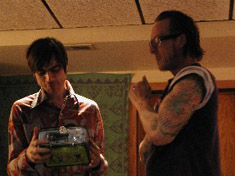 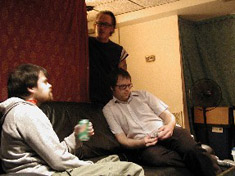 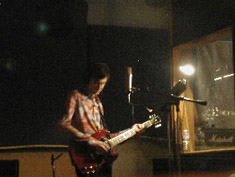 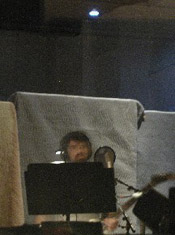 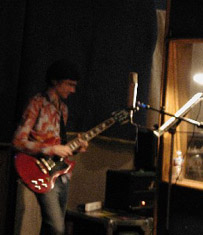 ...Yesterday (Thursday 4/4) the regular studio schedule commenced. Scott came in first and worked on his bass lines; Pat came in really early to discuss tech issues with engineer Chad. After debate, the important technical conclusion was reached: "screw the click!" Brian wandered in later and mused on whether a particularly large apple had been chemically influenced. By 6PM everyone had arrived and they worked on "Mad Kow" and a brand new song called "Buttafuoco."

A bunch of interviews have been going on too. Pat and Chad were interviewed for Mix magazine on Wednesday, Rivers was interviewed for Playboy on Tuesday, and Brian talked to Guitar Player today.

...Here's a new article over at Billboard on the recent weez developments...

...Here's the Spanish weezer site 'MIJ', they have a set of fresh pix from the recent Lisbon and Madrid shows up...

...Here's a website devoted to the recent weez show in Glasgow. There are a bunch of nice hi-res photos up now!