...Summer Tour preview (in case you missed it):
there is an extensive North American weezer tour being planned out for July and August. Dashboard Confessional is in fact confirmed as one of the opening acts. The other opening act is still "T.B.D.", but they have some pretty cool possibilities. More on this stuff as details are sorted out. Other tour info (other countries, etc) is not far enough along yet to make an announcement , but the wheels of progress are spinning.

"...the kids here were super super cool....One kid got on stage somehow and I had a flashback [to Scotts first show with weezer, when someone jumped on his back during the show] ...so I was ready for anything...I think the kid saw the look in my eye, so he just danced in place, had some second thoughts...and jumped back into the crowd!" -Scott (Mr. Bass-man)

the fans tell us what they saw... 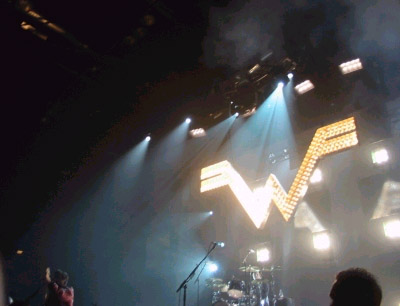 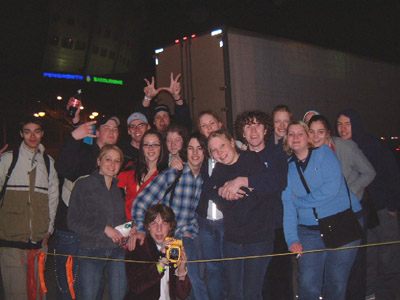 (Note: tonights setlist was identical to last nights [Edmonton] setlist - see below for a picture)

Japanese release date: May 11 (bonus tracks "Island..." and "Living Without You" plus bonus mini-movies.)...The Dope Nose single there will most likely be released May 18.

UK release date: May 13 (bonus tracks "Island..." and "Living Without You" plus bonus mini-movies.)

Canada, Mexico and South America releasing with the US on May 14. (bonus tracks = the mini-movies.)

(note the US release will also have the mini-movies, they are a standard feature on all "Maladroit"s.)

...special announcement for those in the Eau Claire, Wisconsin area: A local Weezer tribute band called 'Weerez'is playing their first show thursday april 25th (tomorrow!) at the House of Rock on Water St. Eau Claire. If youre missing some loud weez-like action and are in Eau Claire, now you know where to be!

NEW: These pictures were not part of the original post. They were provided exclusively for Weezerpedia by Karl Koch.

[click on any photo for a larger size version]