...I am awaiting info on international Maladroit release dates and related things, like anything on new commercial singles and what not. With the continued success of "Island In The Sun" in Europe, while "Dope Nose" starts turning heads in the UK, its gonna be interesting. Usually, International release dates are a bit later than the US, with the exception of Japan which always attempts an early release. The original claim on the UK tour concert flyers that Maladroit was to be released on April 29th there has not been confirmed, and I have my doubts. Some fans have written in some dates theyve spotted, such as a June 13th release date spotted in Finland. When I have more info it will be here.

...Speaking if international things, 2 different re-releases of the highly sought after Blue Album LP have surfaced. For background: the Blue Album was originally only released on vinyl back in early 1995 in the UK, and frenzied collectors have pushed the usual selling price of this under-produced item to up over $300 since then. But now, 7 years later, 2 different other countries have re-pressed the LP for vinyl lovers who are on more of a budget.

I reported last fall that Japan was the first to do it, but these were very slow to surface, as they had a strict "No-export" ban on them- it even says so on the record jacket! But leave it to eBay to lure those sellers willing to risk the ire of the Japanese Customs Police. So far no one has actually reported buying the LP in Japan and transporting it anywhere else, so who knows how these auction sellers are locating copies to sell. However I have had a few Japanese fans write that they have seen and bought the LP in specialty shops there.

More recently, a German pressing has surfaced (first, curiously, on a Swedish mail order website), and it has also spilled over into the rough and tumble world of eBay auctioning. This edition carries a sticker on its shrinkwrap that claims it to be taken from the "original masters", which is in itself an interesting claim as no one I contacted at Geffen has even heard about this one. (For that matter, they hadn't heard about the Japan one either). 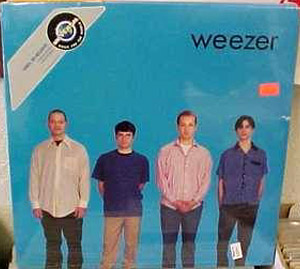 ***"how can i tell the difference? i dont want to be ripped off!" If you want a UK 1995 original, its quite simple: NO UK LPs have ever come sealed/shrinkwrapped. The German one comes sealed, with the sticker (see picture). While Japanese LPs may or may not come sealed (often they use a special resealable bag), only the Japanese one has the built in "NO EXPORT" text right on the back. In both cases the index number will be different from the original UK one, which is "GEF 24629". (the Japanese one is "GEF 24629 (uw-001)", and I'm not sure what the German one is, but it will definitely say 'Made in Germany' on it somewhere with a somewhat different index number.) Also, The original has the "Geffen Ball" logo on the label, while the Japanese one does not (Havent seen the label of a German one yet). So any one of these LPs may be claimed to be "rare" and "original", but pay attention to the details and youll know when to stop tossing money at it. No one seems to know how many of these new re-issues they made, but so far the supply seems to be holding up.

While were talking vinyl, many have asked about a "Pinkerton" re-issue. As far as I know there are no plans for it. Pinkerton was issued in the US (like the Green Album), and was thus much easier to find in the US... for about 6 months in 1996-7. these days it also has started to command bigger bucks on the re-sale market, but no re-issue has been mentioned as far as I know.

...a cool new Rivers interview with the RockNews.com website is online here. The interview actually just lists Rivers's responses on several currently relevant subjects. Pretty cool, if a tiny bit out of date (a lot can happen in a short amount of time in weez-world!)

...(meanwhile, in the studio? patience, grasshopper...)