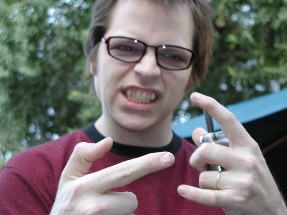 ...from Sunday, Pat has an "off camera" moment at the AP photo shoot...

...Dusty West news: AM Radio is now confirmed to be an opener (i think theyll play first, then Pete Yorn) ...Click on that there dusty link for free AM Radio mp3s. Additionally, they will be the opening act on the Japan World Cup Tour, which immediately follows in May.

...Okay, what you might have seen floating around on some sites has been confirmed: The Dope Nose video will be shot with Marcos Siega, who promises to keep it exciting this time with drag racing and motorcycles and stuff. To be shot next week.

...tomorrow the guys go back into the studio, to pick up where they left off with the recording of their 5th album, as yet untitled.