...well today brought a healthy session in the studio, with lots of work done on both "Slob" and "Living Without You". In "Slob" Scott and Brian finished and fixed their backup vocals, and Pat laid down some sweet alternate drum bits to help round things out. Im not sure what was going on with "Living Without You", but I do know that both songs got finished and are on their way to Miami to be mixed now. Tommorow: more work. 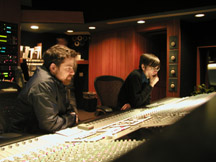 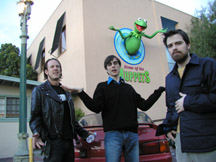 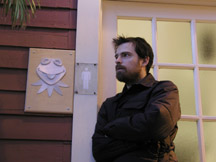 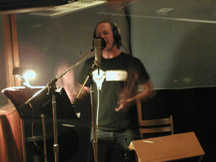 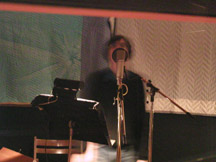 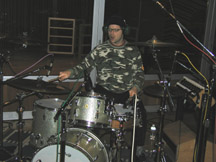 ...photograph video news: the video is up on Much Music USA's "keep/trash"-type show, this week. Now through Thursday you can vote for it so they show the video! just go to www.mmusa.tv...
...Then click on the center square.(launches the flash section)
...After that, click on the green bar.("oven fresh")
...Choose Weezer and vote, vote, vote, to get the video on TV!
update:We learned that Much Music USA did play the video today, apparently based on weezer's domination of the 'oven fresh' online poll! With YOUR votes, they should keep playing it this week! So vote 'em on up!

"...I got my first ticket while listening to Why Bother on Pinkerton. I was going 60 mph in a 45. For some reason I seem to consistently drive faster while listening to Weezer. I was with my friend Dan, (we're both huge Weezer fans) and he turns down the music to tell me that there's a cop. For some stupid reason I thought he was joking so I said back, "Dan, I own the cops." After he had pointed out that a cop was actually following us, I pulled over and was issued a ticket. The cop showed no pity on us even though we were listening to Weezer, and I think I just angered him when I asked him if he was a Weezer fan..." ---R.R.

"...i was coming back from a weezer show in DC and got pulled over for speeding. of course i had my weezer jacket on and was blasting blue. he asked me where i was coming from and i told him that i was coming from the weezer show. he rolled his eyes and made a "humph", then went back to his car and came back with my speeding ticket. cops don't like me and i don't like cops." ---C.

"...I was pulled over for some odd reason maybe I seemed reckless. The cop made me get out of the car and had me walk in a straight line (no i wasn't drunk) and he saw on the back of my WEEZ shirt the quote "If It's too loud turn it down." And he responded to it, "Those weezer guys sound like a couple of pussies." ---J.M.