...The weezer board member ticket givaway was sure over fast! The following 50 weezer bboard members have scored a pair of tickets to tomorrows free show at the Whiskey in Los Angeles: In no particular order...


Those who successfully claimed tickets have had an email sent to them already. And to those that didn't write in in time: more tickets will be available at the door, day of show, on a first come first serve basis. Come early, as the number of tickets that will be waiting at the door is unknown, and the start time for ticket distribution (or whatever method they plan on using, i.e. maybe wristbands, hand stamps, or whatever) is NOT known at this time!

People still needing tickets should also remember to be listening to KROQ's Kevin and Bean show at 7:15 AM tomorrow (5/13), as they will have the first info on how to get tickets to the show from KROQ. They have a decent (though still limited) amount of tickets to give away as far as we know.

Singapore, Japan, Australia, Finland, and Ireland have all already released Maladroit in the last few days, and the big US release starting at 12:01 AM Tuesday is looming! Many local stores around the country are having mini-release parties/midnight sales, and so many have sent in their info that its impossible to sort though at this point- check with your local stores to see if they plan on opening at midnight to start selling! Also check the message boards, as some fans have been posting their local info there. (And see the "listening party" list below [in 5/10], and see 5/9, below, for some other Maladroit events...) Several other new albums hit on Tuesday as well, such as the new Moby, so some stores pull the midnight sale to cater to the various fans who gotta have it right away. Also remember that all copies of "Maladroit" are individually numbered from 1-600,000, and (besides the *very* lowest numbers) any of these could be distributed anywhere!

Meanwhile, in its 9th week on the chart, our little pride and joy "Dope Nose" continued getting strong airplay across the country, but took a 1 placement hit as Korn's single started to rise. Thanks to all who have requested the song so far. It remains to be seen what effect "Maladroit"s release will have, and as we know anything can happen in the wacky world of the modern rock single! Meanwhile "Dope Nose" has gotten into big playlists in the UK, France (where Green Album single "Island In the Sun" is currently the #2 song in the country, overall!), Indonesia, New Zealand, Australia, and of course Canada.

Other Maladroit tracks getting notable play are "Love Explosion" on 93.7 KOOX The X and "Fall Together" on 88.1 in Utah...[a more detailed report on radio biz to come- thanks for all the reports youve sent in, theres a lot of info to wade thru!]

The Dope Nose video is in rotation on Mtv and M2, as well as Much Music Canada. Vote for Dope Nose in the "Oven Fresh" section on Much Music USA's website! 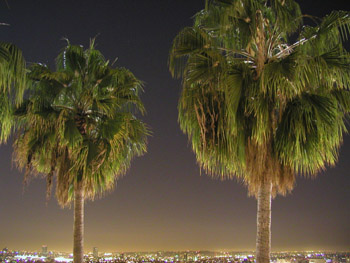 ........today the band pulled into Los Angeles and had a combo day of rest and seriously catching up on personal and band business, before the Whiskey show scheduled for Monday and the flight to JAPAN on tuesday! Remind the band to sleep once in a while the next time you see them. Also today I shot pictures of the West Los Angeles house which contains "THE Garage" seen inside the Blue album and in the "Say It Aint So" video. The house and rehearsal garage have been essentially the same since members of weezer moved out in 1994-5, but in a short while from now the house is going to be completely renovated for an older couple who have no interest in alt-rock history. So I got some last photos of the ol' place, for use in a future web feature on the band's history.