..today was simply a continuation of yesterday for the weez, as we boarded a 747 in Los Angeles at 12:30 in the afternoon on Tuesday 5/14, flew about 11 hours, and landed in Tokyo at 4 PM....on Wednesday, 5/15. Our chronological freind The International Dateline snuck in as it always does and stole a day away. But its ok, we get it back when we go back to the USA. The first show of the Japan World Cup Tour '02 is on 5/16 in Sendai, which is several hours away from Tokyo by train. So upon landing at the Tokyo airport, we got in some vans and cruised to the train station, where we boarded a bullet train to Sendai. We finally arrived in Sendai at about 9:30 PM, and got into a bunch of vans that took us to a hotel far from the city center in a very boring suburban area, whereupon everyone discovered that the only place to eat within walking distance, Mos Burger, had just closed. One of the all time most exhausting travel days, high fives! 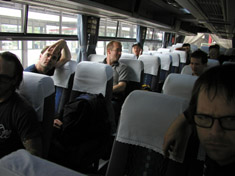 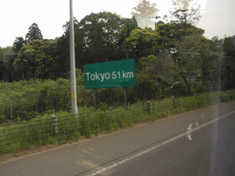 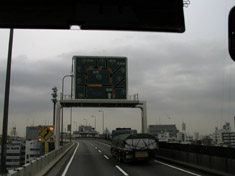 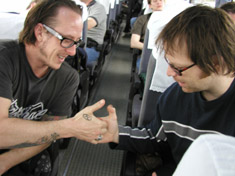 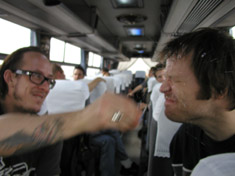 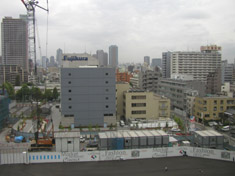 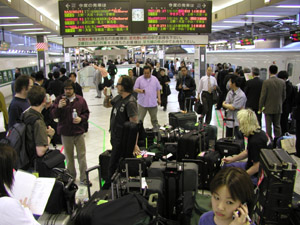 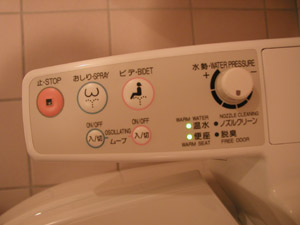 ...highly organized traffic jams; Pat gets a 'capful'; whats this button do?...

...updated 5/16 Maladroit listening parties/grassroots 'weezer-fests' list:
NOT a tour! No band appearences! These are events either hosted by people from the record stores and record label, or organized by fans for fans. Some of these will have weezer cover bands playing. Some of these are for charity. Most will have a lot of weezer music playing. There may be free snacks and stuff, and weezer givaway items. Each event is unique. If you have mors info on any event listed here, or if you are organizing a grassroots "weez-fest" in your local area, send me the details and ill add it to this list. Numerous fans have sent in various reports from their local events that have already happened, from big parties with free stuff and live music to a handful of kids camping out for a midnight Maladroit sale. Theres too many stories to list them all, but they are appreciated- its cool to get a "snapshot" of local weez action around the country and world!

City:....................Location:.....................DATE:........KNOWN DETAILS:
Minneapolis.......Electric Fetus................5/10-5/20..."Free Weezer stuff all week! Win an autographed & framed Weezer poster! Balloons! Anyone buying any Weezer CD gets a spin on the Weezer Wheel to win stuff!" [a pic of this wheel is on the way!]
Buffalo, NY....details are still sketchy for this grassroots Weezerfest, but heres what we know: "There's gonna be a ticket sale on the Corner of Kenmore and Niagara Falls Boulevard on Saturday and Sunday May 18th and 19th from noon to ten. Tickets are five dollars for food, beverages, and some great listening. Spread the word and the luv. The flyer says to E-mail this address: Andik@wzrd.com "for info"...The event itself is scheduled for June 13th (in honor of Rivers's birthday) "...we're talking to 103.3 the edge...to see if they can help us out..."
Olympia, WA Homemade grassroots Maladroit Release Party at a house. "...We just bought $70 worth of Weezer stuff, (pins, postcards, posters) for a giveaway, and for the grand prize we will be raffling off the Maladroit CD.
The party is on Saturday, May 18, at 8:00 pm at our house in Olympia. If you could help us promote our party, that would rock! The address is 412 Division St NW in West Olympia. People can email me here for details...we want as many people as we can cram in our house to show up!

...a small sampling of the many, many Maladroit/weezerfest stories that have been coming in...

...discographic note: You might not have known that there was another release by weezer on May 14th besides "Maladroit". The weezer song "Oh Lisa" [previously only available as an import b-side] is on the MTV/WWF Tough Enough 2 soundtrack that was released yesterday. The album is mostly a pretty "hard n heavy" compilation, which works best when staging backyard wrestling events. 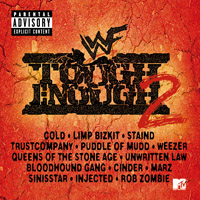